Wellbeing Event at Schroders with Nick Panay: How to Optimise Female Hormone Health throughout your lifetime

This event has passed. 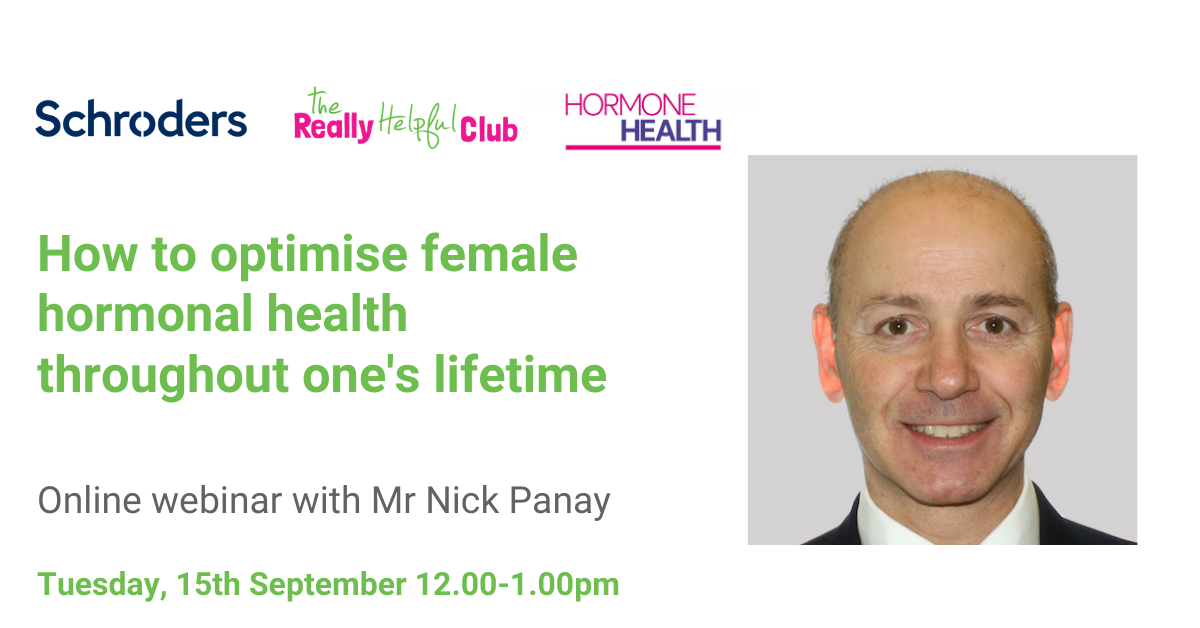 Wellbeing Event at Schroders with Nick Panay: How to Optimise Female Hormone Health throughout your lifetime

This is particularly pertinent during menopause, as knowledge and understanding grows about this significant stage in women’s lives.  Approximately 1 in 4 women suffer from severe symptoms during menopause and it is estimated that up to 1 in 10 leave their jobs as a result.

We are delighted to announce our next wellbeing talk at Global Asset Manager Schroders on ‘How to Optimise Female Hormone Health throughout your lifetime’.  The menopause and wellbeing programme at Schroders was initiated by their CEO, Peter Harrison, who understands the importance of bringing this topic into focus and how education brings benefits to the organisation and its people.

Consultant Gynaecologist, Mr Nick Panay will speak about hormone changes throughout women’s lives. This event offers practical advice on managing the physical and emotional symptoms associated with hormone changes and ways of coping with them. Severity of symptoms vary from person to person, as does the impact these symptoms have on a woman’s working and private life. This event is being hosted to raise awareness of the importance of hormone health and to educate us all on how we can better understand the impact of hormone changes and support each other.

Topics to be covered include:

Nick Panay is a Consultant Gynaecologist with a special interest in Reproductive Medicine and Surgery, Menopause and Menstrual Disorders. He is a Consultant Gynaecologist, Subspecialist in Reproductive Medicine & Surgery Queen Charlotte’s & Chelsea Hospital and Chelsea & Westminster Hospital London, also Honorary Senior Lecturer, Imperial College London. He has a particular interest in minimal access surgery, both laparoscopic and hysteroscopic. He heads the operative outpatient hysteroscopy centre at Queen Charlotte’s Hospital which facilities the one stop investigation and treatment of women with bleeding disorders.

He is currently trustee and on the medical advisory committee of the British Menopause Society (BMS), Honorary Senior Lecturer at Imperial College London and Guest Professor, Capital Medical University, Beijing Obstetrics and Gynaecology Hospital. He is Secretary General of the International Menopause Society (IMS) and was the Editor-in-Chief of Climacteric (The Journal of the IMS). He is also the immediate past honorary director of conferences at The Royal College of Obstetricians and Gynaecologists, London. He is the Director of the private Hormone Health Clinic in Harley Street.

As director of the West London Menopause & PMS Centre at Queen Charlotte’s & Chelsea and Chelsea & Westminster Hospitals, he heads a busy clinical and research team which publishes widely, presents at scientific meetings and trains health professionals at all levels. Much of his teams’ research has focused on improving the understanding and management of menopause, premature menopause, PMS, PCOS, new HRT preparations and complementary therapies.

This talk is for Schroders’ employees who are welcome to invite their partner or spouse to attend.

This website uses cookies to improve your experience while you navigate through the website. Out of these cookies, the cookies that are categorized as necessary are stored on your browser as they are as essential for the working of basic functionalities of the website. We also use third-party cookies that help us analyze and understand how you use this website. These cookies will be stored in your browser only with your consent. You also have the option to opt-out of these cookies. But opting out of some of these cookies may have an effect on your browsing experience.
Necessary Always Enabled
Necessary cookies are absolutely essential for the website to function properly. This category only includes cookies that ensures basic functionalities and security features of the website. These cookies do not store any personal information.
Non-necessary
Any cookies that may not be particularly necessary for the website to function and is used specifically to collect user personal data via analytics, ads, other embedded contents are termed as non-necessary cookies. It is mandatory to procure user consent prior to running these cookies on your website.
SAVE & ACCEPT